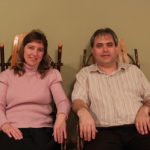 Joe and Esther were born and raised in an Old Order Amish sect in Ashland, Ohio. At 17 years of age, both were baptized as members of the Amish Church. Not long after their 18th birthdays, a former Amish man shared the gospel with them. Joe and Esther realized they were sinners in need of a Savior.

After receiving Jesus Christ as their savior, they married and intended to remain within the Amish system. However, they realized if they wanted to believe their salvation was by faith, grace, and Christ alone they had to remain silent about their faith or face excommunication and shunning by their family and friends.

Joe and Esther made the hardest decision of their young lives and left the Amish way of life forever to live openly for Christ. Today they have two children, Jonathan and Rachel.

Each morning Joe sat outside his factory job aching for his beloved people who were dying and slipping into an eternal lake of fire without hearing the Good News of Salvation. What began as a burden, to see their Amish family and friends come to a personal relationship with Christ, became a divine call; to see every Amish person hear the clear message of salvation.

The three-fold purpose of MAP: